The ongoing coronavirus disease 2019 (COVID-19) pandemic, caused by the severe acute respiratory syndrome coronavirus 2 (SARS-CoV-2), is now established to be more likely to lead to symptomatic and serious illness in males relative to females. This may extend as far back as pregnancy, suggests a recent study released on the bioRxiv* preprint server.

Males are at three times the risk of developing severe disease, requiring intensive care unit admission, and are more likely to die of the infection, compared to females.

Even without SARS-CoV-2 infection, male fetuses are more likely to be sick and to die than females, perhaps because of the numerous differences between the two sexes that accumulate during the nine months of intrauterine development. However, the exact mechanism is unknown.

This extends to SARS-CoV-2 infection, where male children are more vulnerable to severe disease, as infants, and to multisystem inflammatory syndrome in children (MIS-C), where the affected individual experiences shock, cardiac involvement, and higher levels of inflammation. Genetic influences on the immune response, as well as many environmental factors, are probably responsible for the decreased survival of male children in this pandemic compared to infected girls.

The current paper examines the possibility that the sex of the baby carried by the mother may operate backward to modulate the mother’s immune response, especially targeting the innate immune response.

The result may be crucial in the way the mother-fetus pair react to the infection. This finding thus contributes a different paradigm of how fetuses react to immune challenges in perinatal life based on their sex. This may include differences in the way passive immunity is transferred from the mother to the fetus, causing differences in the extent to which male and female fetuses are susceptible to infection.

Type I and III interferons (IFN) are the archetypal antiviral response to viral infection. They bind to their receptors to induce the expression of interferon-stimulated genes (ISGs), that produce inhibitory effects on viral infection via multiple mechanisms.

Type I IFN activation is strongly related to both disease severity and mortality in both the earlier infection outbreaks, namely, MERS and SARS (Middle East respiratory syndrome and severe acute respiratory syndrome, respectively). In the current outbreak, too, aberrations in this pathway result in the same severe outcomes.

IFN signal intensity differs between the blood and the lung tissue, but the differences at the placental interface between male and female fetuses have been less thoroughly examined.

However, placental immunity to bacterial infection does differ between pregnancies with male vs. female fetuses, as well as in conditions of maternal stress and when the mother is ingesting too much fat.

What were the results?

ISGs expressed differently between the sexes

The researchers found that the presence of the virus in the mother was linked to sex-dependent changes in the ISG expression profile in the placenta. The classical ISGs IFI6, CXCL10, and OAS1 were expressed at higher levels in the male-pregnancy placentas in infected mothers, compared to naïve mothers.

CCL2/MCP-1, a cytokine involved in monocyte chemotaxis, is released in response to type I IFN, and is present at higher levels in the lungs of COVID-19 patients, along with type I/III IFN-stimulated MX1, another antiviral gene.

The anti-inflammatory factor IL10 also shows the same trend. These molecules are thus present at higher levels in the placenta following SARS-CoV-2 infection, primarily due to their increased expression in the male placenta.

The presence of placental inflammation is associated with a reduced antibody transfer across it. In the case of a male fetus, this study showed a global reduction in immunoglobulin G (IgG) antibodies to all the SARS-CoV-2 antigens in the cord blood compared to the maternal plasma.

In female fetuses, the reduction was observed only with anti-N IgG2.

Overall, anti-spike antibodies were reduced in male placentas, as well as FcRn-, FCGR2A/B- and FCGR3A/B-binding spike-targeted antibodies. FcRn is neonatal FcRs that chiefly mediate the passive transfer of IgG across the placenta, though others are also involved.

Interestingly, female fetuses in SARS-CoV-2-infected pregnancies also showed a lower-than-expected placental transfer ratio (less than 1.1-1.5) compared to other infections, though higher than that for male fetuses, at 0.8 and 0.4, respectively.

This sex-dependent reduction in the transfer of virus-specific antibodies was not observed with antibodies to pertussis or influenza antigens.

The study also shows that the fetal sex influences the titers of maternal antibodies specific to the virus, with lower anti-SARS-CoV-2 spike IgG antibodies in women carrying a male fetus than a female. This effect was not seen with antibody transfer involving antibodies to other antigens.

It appears that SARS-CoV-2 infection induces a reduction in the specific antibody response in mothers carrying male fetuses, concordant with earlier studies showing that male fetuses suppress inflammatory responses in the mother more than females do.

Since inflammation is directly linked to the antibody titer in COVID-19, this finding is plausible.

For the placenta to transfer antibodies from the mother to the fetus, its fragment crystallizable receptors (FcRs) are important. Especially, IFNs are vital for FCγR1 expression, and IFN-suppressing infections like that with the malaria parasite or the human immunodeficiency virus (HIV) have been shown to reduce placental antibody transfer.

The researchers also found that FCGRT, FCGR1, FCGR3A and FCGR3B were increased at higher levels in male placentas following maternal SARS-CoV-2 infection, but not FCGR2A/B

FCγR1 receptor expression remained unaltered by the presence of infection or fetal sex in pregnancy. The presence of other Fcγ receptors with FcRn increases the efficiency of placental transfer. When this was examined, FCγR3 and FcRn were found to be more significantly associated in male placentas. This was absent for FCγR1 and FCγR2.

Overall, therefore, “maternal SARS-CoV-2 infection has a sexually dimorphic impact on placental Fcγ receptor expression, driven by an increase in overall expression and in FCγR3/FcRn co-localization in male placentas.”

These differences may reflect “an effort to increase the transfer of antibodies to infants to empower them with enhanced immunity,” and are the result of increased gene transcription.

Despite this, placental antibody transfer remains lower to male fetuses. This phenomenon is driven by the differential activation of inflammatory pathways that drive different levels of antibody production in mothers, coupled with the compensatory FcR expression differences.

Higher placental IL10 and OAS1 were associated with a higher transfer of anti-spike IgG1 in females and males, respectively.

Other factors, such as the severity of disease, the duration since infection, the birth weight, and the term of pregnancy when the baby was born, were not associated with such differences. 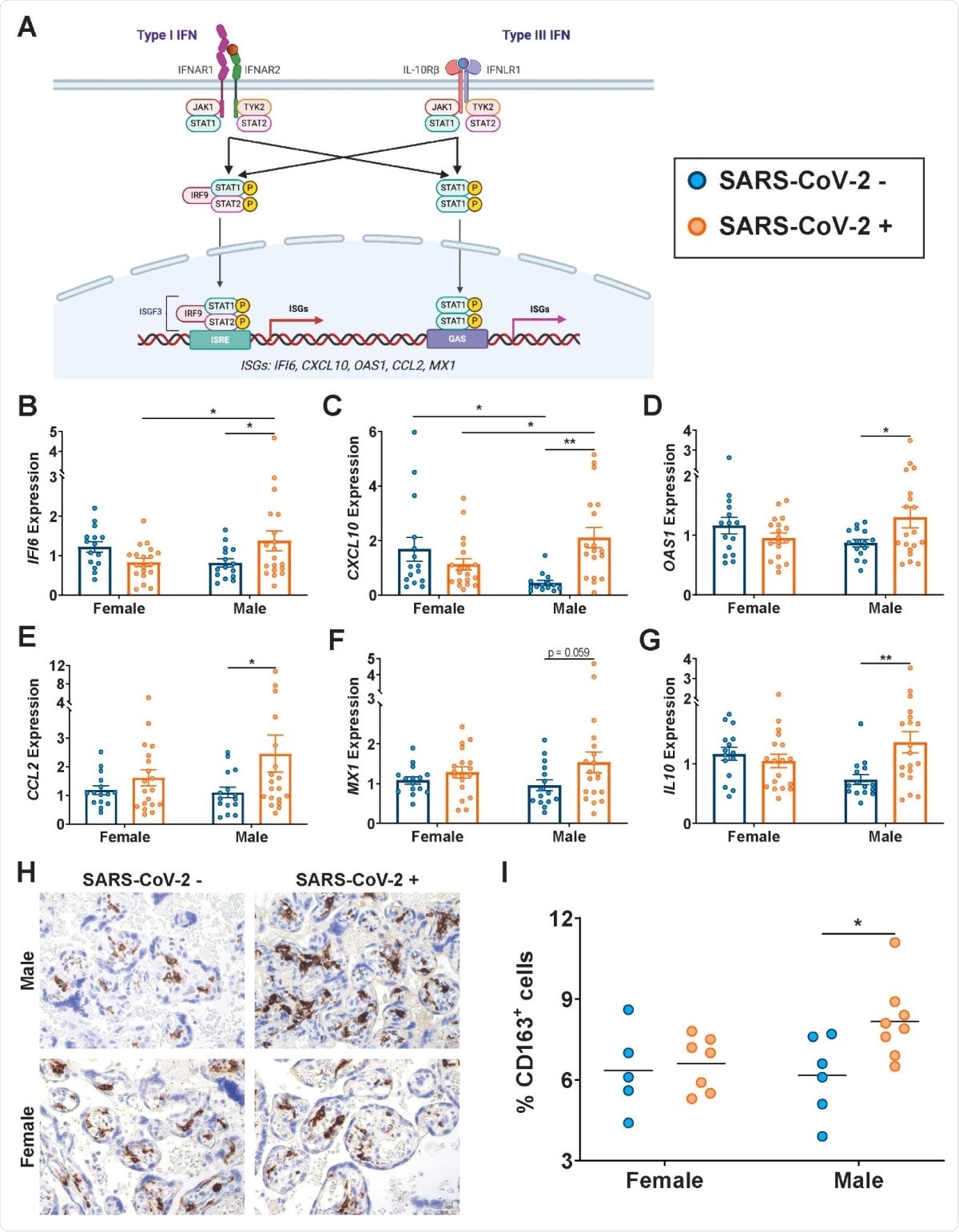 What are the implications?

This is an important area of research, since passively transferred maternal antibodies are vital to keeping the fetus safe from many viruses. This is, in fact, the rationale for vaccinating mothers against whooping cough and influenza during pregnancies, so that the newborn babies may be kept safe while they develop their own antibodies.

These findings suggest a distinct bias towards impaired innate immunity in SARS-CoV-2-infected mothers bearing male fetuses, extending from the plasma antibody levels to placental antibody transfer, and FcR expression on the placenta. The muted immune response may be to improve tolerance of the fetus. The effect on the risk of infection with this virus in male fetuses is still unknown.

Type I IFNs activate the immune system and inflammatory pathways, but type III IFNs are more concerned with raising an immune barrier.

Since the innate immune response to SARS-CoV-2 infection is mediated by type I and III IFNs, and IFN levels are high in pregnancy, the effect of higher ISG expression in this condition remains to be determined. Such (type III IFN) effects may be either helpful in limiting placental infection, or possibly (type I IFN and ISGs) harmful to placental development and fetal growth.

Long-term outcomes of the reduction in IFN levels in SARS-CoV-2 infection in pregnancy also remain to be studied, with respect to fetal development and the impact on metabolism and neurodevelopment in later life. The study does underline the importance of fetal sex in evaluating placental pathology and fetal outcomes, and of following up males and female neonates separately to understand the later-life sequelae on metabolism and neural development.

Read This If You Recently Bought Classic Sabra Hummus

The shock and reality of catching Covid after...

I’ve recovered from Covid. Why do i still...

Recovered COVID-19 patients may need only a single...

Symptoms of mental health disorder is the...