A therapeutic interfering particle for SARS-CoV-2

The evolution of microbial resistance to therapeutics and vaccines is common across various pathogens. Evidence from the past year indicates that the severe acute respiratory syndrome coronavirus 2 (SARS-CoV-2) expresses several genetic variabilities that have resulted in new variants with increasing resistance to antibody-mediated neutralization.

In particular, SARS-CoV-2 variants of concern (VOCs) such as the B.1.1.7, B.1.351, P.1, and B.1.617.2 are more transmissible and have been shown to evade both infection- and vaccine-induced immunity. The continued emergence of SARS-CoV-2 variants indicates parallels to seasonal influenza viruses, which constantly evolve with a significant lag between the emergence of variants and more effective vaccines. 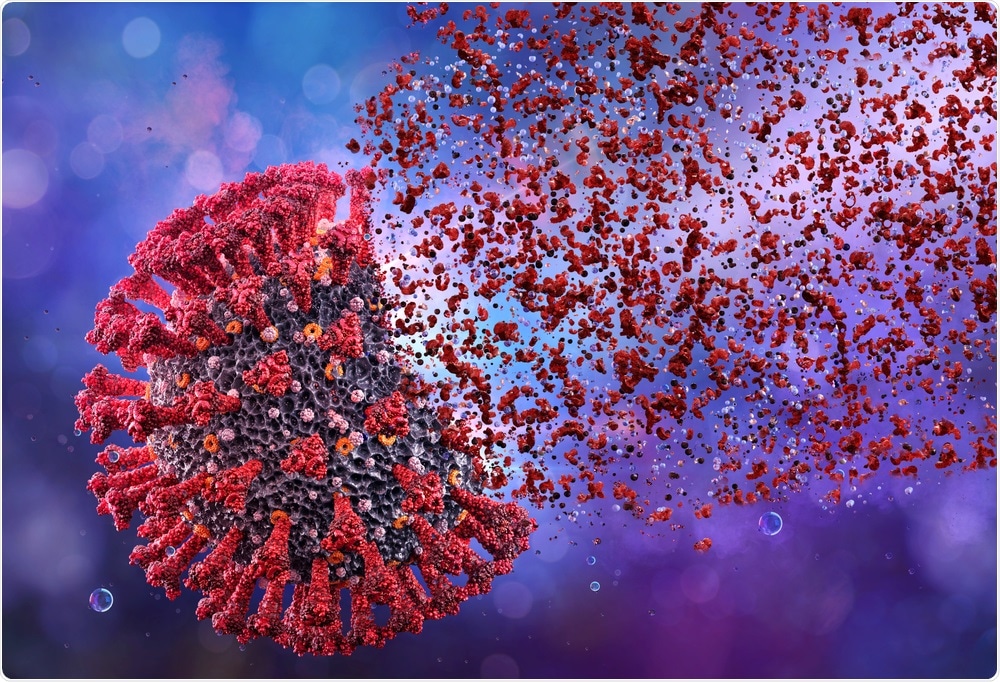 Viral-deletion mutants that can conditionally replicate and inhibit wild-type viruses, which are also called defective interfering particles (DIPs), have been proposed for use as single-administration antiviral interventions with high genetic barriers to viral resistance. However, theories argue that therapeutic DIPs or therapeutic interfering particles (TIPs) must be capable of the conditional spread between cells with R0 that is greater than 1.

Recently, researchers from the United States have reported their attempt to engineer TIPs that can conditionally replicate with SARS-CoV-2, inhibit viral replication 10–100 fold, and exhibit R0>1. To this end, the TIPs inhibit the virus through competition for viral replication machinery. In their work, a single dose administration of TIP ribonucleic acid (RNA) was found to inhibit SARS-CoV-2 in continuous cultures.

Interestingly, TIPs showed high efficacy against viral variants resistant to neutralization by antibodies, like the SARS-CoV-2 Beta variant B.1.351. Prophylactic, as well as therapeutic intranasal administration of lipid-nanoparticle TIPs, in hamsters durably suppressed SARS-CoV-2 activity in the lungs by 100 fold. This treatment also reduced the expression of pro-inflammatory cytokines and prevented severe pulmonary edema.

Taken together, these findings demonstrate that a synthetic sub-genomic viral-deletion mutant can conditionally replicate and suppress SARS-CoV-2 infection in vivo, thus constituting a TIP. TIPs, if successfully adapted to the clinic, could represent a class of single-administration antivirals with a high genetic barrier to the evolution of viral resistance.

Evolution of unmet medical needs during the SARS-CoV-2 pandemic

Several therapeutic and vaccine interventions have been studied against COVID-19, with newly emerging variants showing an increased ability to escape immunity and vaccines. While during vaccine distribution, the unmet need was largely for post-infection therapeutics for unvaccinated patients. However, current medical needs have shifted to pre- and post-exposure prophylactics as a result of the emergence of more infectious and vaccine-resistant viral variants and increased availability of home rapid tests.

Previously, this unmet need was focused mainly on individuals immunosuppressed by chemotherapy, transplants, or biologics, with a poor immune response to vaccines and thus needed a prophylactic. However, the need has now extended to the general population exposed to the virus, which makes active development of these prophylactic treatments crucial due to the lack of a preventive agent post-exposure to SARS-CoV-2.

To conclude, the current study showed that TIPs inhibit SARS-CoV-2 in vitro and that new viral variants cannot escape TIPs. A single intranasal administration of TIPs in hamsters was also found to successfully reduce viral load in the lungs.

TIPs were able to suppress inflammation and severe disease when administered pre- or post-infection. These findings offer proof-of-concept for a class of single-administration TIP antivirals that may evade the current need to constantly update medical interventions against newly emerging variants.

“Notably, TIP-mediated reduction in SARS-CoV-2 viral load, like mAbs and small-molecule inhibitors, could generate long-term protection to re-infection akin to protection from natural infection, which may offer more durable protection against SARS-CoV-2 reinfection than current vaccines”

Creating a timeline that details the earliest COVID-19...

Researchers aim to separate fact from fiction for...

Unhealthy diets tend to be bad for the...

Unique infectious profile explains why it is...

A secondary analysis of a UK study